Codrington Wind Farm consists of windmills (turbines) installed on farmland 20 minutes south of Port Fairy.   Standing on hills overlooking the Southern Ocean, they are positioned to take full advantage of the winds that have helped form the spectacular Shipwreck Coast.

Each windmill has the generating capacity to supply power to 1000 homes. Other than the wind, they utilise no natural resources, exude no greenhouse gasses and are relatively silent.

The windmills have an expected life span of around 25 years. At the end of their life they can be be replaced or removed with little or no lasting impact on the surrounding area.

So why are there objections?

The windmills are BIG.

The blades have the same diameter as the wingspan of a Boeing 747. The visual impact is considerable.

There is concern that the construction of a further three Wind Farms, particularly the planned farm at Cape Bridgewater, will detract from the visual beauty of the region.

It's worth taking a look for yourself and forming your own opinion.

Tours of the Codrington Wind Farm can be booked through the Port Fairy Visitor Information Centre.

The lack of natural vegetation, evident in this photograph below, is the result of farming by white settlers dating from the 1800s and is typical of the coastline between Port Fairy and Cape Bridgewater. The access roads built to facilitate the installation of the windmills will be grassed over. 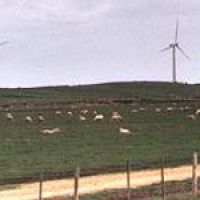 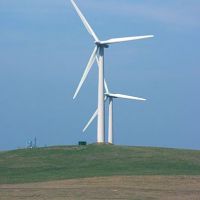