The Southern Right Whale (also known as the 'smiling whale') is one of the largest, gentlest mammals. Like humans, they are warm blooded, give birth to live, fully developed young, breathe air, and feed their young on their milk. An adult whale averages 15 metres in length and 50 tonnes in weight.

The Southern Right Whale is in the Baleen family of whales (blue whale, fin whale, southern right whale, sei whale, minke whale and humpback whale) which denotes that they are toothless whales. Whales exist only in the ocean.

The Southern Right Whale has a smooth black back, and a v-shaped spout from its blowhole, but no dorsal fin. Each whales' underbelly is marked with white patches and the whale's head has unique callosites (crusty growths) that enables the whale to be readily identified by humans. The Southern Right Whales normally swim between 3 to 9 kilometres per hour.

The fertile waters of the Antarctic make it perfect feeding grounds for the Southern Right Whale as well as for all other whale species, seabirds, seals, squid and fish. Here the whales feed on krill. (The krill is a shrimp-like marine animal that lives in huge swarms in the open sea. They range from 8 to 60 mm From January to April, a swarm of krill could contain as much as 20 kg per cubic metre). The whales keep themselves warm in the cold Antarctic by developing a layer of fat under the skin, called blubber. These whales stay in the Antarctic over the summer months and annually migrate to their breeding grounds. These whales eat little or nothing at all during their travelling and breeding seasons.

The Southern Right Whale inhabits and breeds from May to September in the southern coastal waters of Australia, especially enclosed bays. The waters off the coast of Warrnambool, Port Fairy and Portland are perfect for breeding grounds.

The Southern Right Whale usually breeds every 3 years. The pregnancy is 11 months. A calf is approximately 5 to 6 metres at birth and can double in weight over the first week. The calf sucks milk from it's mother's milk gland on her underside.

The Southern Right Whales received their name from early whalers. This particular whale swims slowly, in herds, and close to the shore. Once harpooned, they would float on the surface. These whales produced a large amount of oil and whalebone, making it an excellent catch, and the 'right' whale to hunt (see Port Fairy History). Today, the Southern Right Whale is protected in Australian waters.

tail lobbing: raises tail high out of the water, and then slams it's flukes down on the surface

spy hopping: raises head out of the water, high enough to turn and view around itself

body roll: surfaces, rolls over on back, swims along with pectoral fins showing above the water 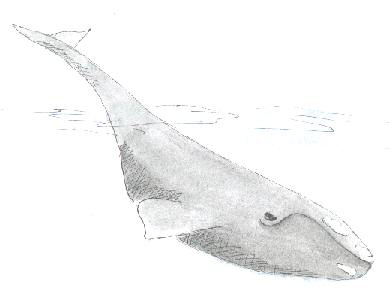