Fishing in and around Port Fairy 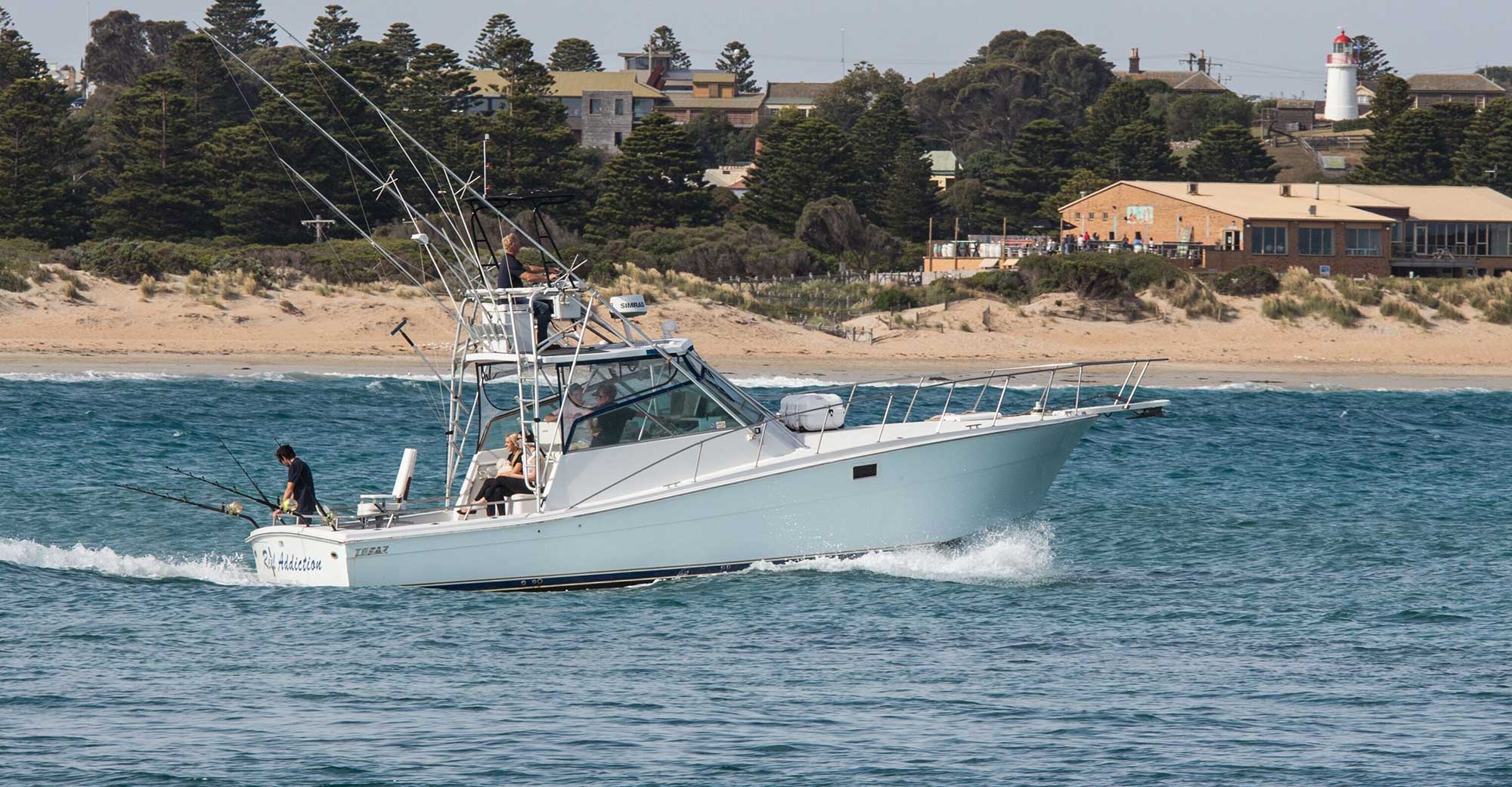 Reel Addiction is a Topaz sportfisher 37 that has been imported from New York. She is an iconic deep sea fishing vessel from the 1980s.

Barracouta
May be caught year round in Port Fairy Bay but best fishing occurs during Winter and Spring. Bait to use includes Bluebait, Whitebait and Pilchard fillets. Also, taken on lures. Due to nature of teeth, using a small wire trace is a sound option. Enters Moyne River Estuary on occasions especially during Winter months.

Bream (Black)
Found in Moyne River estuary with the best fishing to be had downstream of the footbridge including rear of Gardens Caravan Park and beyond. Better baits include all saltwater Worms, Shrimp, Yabbies and small Crabs.

Cod (Rock)
Found in Port Fairy Bay and upper estuary section (from Martin's Point to end of channel) of Moyne River. May be caught year round but colder months best, especially at night. Virtually takes all baits.

Flathead
Found in Port Fairy Bay and may be caught the year round but warmer months best. Takes many baits with Whitebait, Bluebait and Pilchard fillets being excellent. Boat drifter across sand flats often a successful method of capture. Smaller specimens are often taken in upper reaches of Moyne River estuary.

Garfish
Occasionally taken in the smaller inlets and rock pools along the Port Fairy coastline. Successful fishing often necessitates the use of a float together with the use of berley. Popular baits include smaller pieces of salt water Worms, sand fleas or dough (flour and water with a dash of curry powder).

Parrot Fish
common along the rocky sections of coast line and anywhere that weed and kelp beds are found. Bites all year round and in general terms accepts all baits.

Perch (estuary)
Occasionally caught within Moyne River estuary and best down-stream from footbridge. Likely spots are any snags to be found in River, shrubs or trees hanging over the water edge or pylons of bridges. Summer months are best and try live baits including salt water Shrimps and Yabbies.

Snapper
Best in Port Fairy Bay and close to coastline during Summer and Autumn. Mainly taken to about 1kg and generally found in vicinity of rocky or rubble type ground. Takes most popular baits including Pilchard fillets, Bluebait, Whitebait, pieces of Squid etc. May sometimes be caught at end of Moyne River channel (either side) during warmer months.

Sweep
Ocean species found close in along rocky coastline and especially in areas where ground rises steeply from deep water towards surface. Great care in fishing needed and suitable weather conditions required due to vicinity of surf and wave action. May be taken year round, and softer baits including Pipi, Mussel, pieces of Yabby and peeled frozen Prawns are amongst the best.

Tuna (Southern Blue Fin)
You'll need a bigger boat. Generally off the Continental Shelf but sometimes closer to shore.  March to May is when they are most commonly encountered. 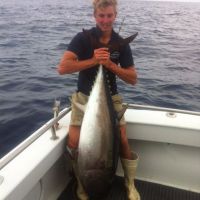 Trevally (Silver)
Sometimes encountered whilst fishing for other species. Will bite on most baits including bluebait, mussel and Pipi. Pilchard fillets being very effective. Smaller specimens penetrate Moyne River estuary. Can be caught all year round but Spring is probably best.

Whiting (King George)
Generally caught close to shore in sand patches surrounding or adjacent to weed or kelp beds. All of the small bays and inlets along the coastline hold fish from time to time. Certainly the better fishing occurs during the Summer and Autumn months. Any of the softer baits are effective including Pipi, Mussel, Worms, Yabbies and Pilchard fillets. During Warmer months fishing from Martin's Point seaward and from end of channel (either side) may on occasions produce fish.

ref: From the Web Archive